One Night in Bangkok…..

So it wasn’t really one night….it was four but time passed so quickly in this city.  I tried to prepare myself for the madness of Bangkok but I don’t think anything can prepare you for this city.  Add in 22 hours of travel and an 11 hour time difference and it adds up to one thing – craziness!

After flying for what seemed like an eternity, I landed in the City of Angels – the translation of the local name of Krung Thep which is a shortened version of the official Thai name of Krung Thep Maha Nakhon.  However, this is an abbreviation of the full ceremonial name which lays claim to being the longest place name in the world.

The full ceremonial name is (and get ready for it!):

This roughly translates to:

The great city of angles, it’s where the immortal divinity dwells, the invincible city, the royal capital endowed with nine precious jewels and full of joy, it is abundant with royal palaces, it’s where the reincarnated angels reside, at the order of Indra, Vishvakarma majestically built the capital.

I think I’ll stick with Bangkok!

From the airport I grabbed a taxi – apparently there’s a few things you’re not allowed to do in a taxi in Bangkok, emphasized with some interesting signage.  One I understand, the other – not so sure.  I found out later it means no bison in a taxi.  Didn’t even know there was bison in Bangkok 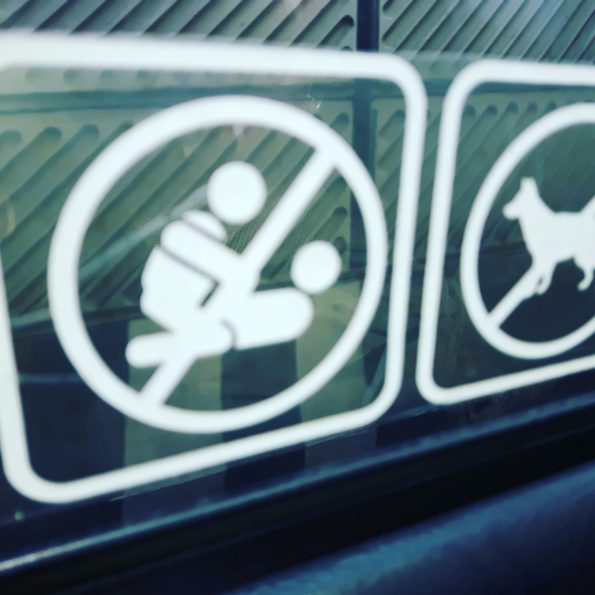 I know what this means… 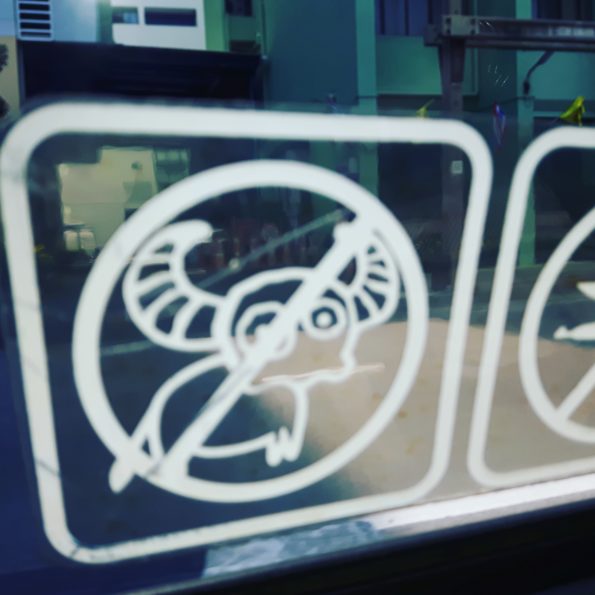 Just a mere hour later, I arrived at my hotel.  One thing to note about Bangkok – the traffic is horrific -it’s the worst I ever seen in my entire life.  The streets are crammed with taxi’s, tuk-tuk’s, scooters, motorcycles – if it’s on wheels, you can drive it here.  If your destination is 15 minutes away, you’ll need at least an hour or more to get there.

I was staying at the Beverly Hotel in Pratunum, which is one of Bangkok’s most colourful and chaotic areas, known for shopping – however my advice would be to stay closer to the Chao Phraya river, as that’s where most of the iconic temples and the Grand Palace is and as I mentioned, getting around Bangkok can be quite a challenge! 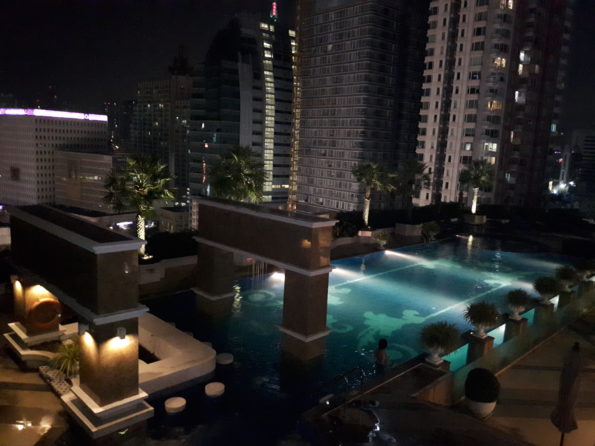 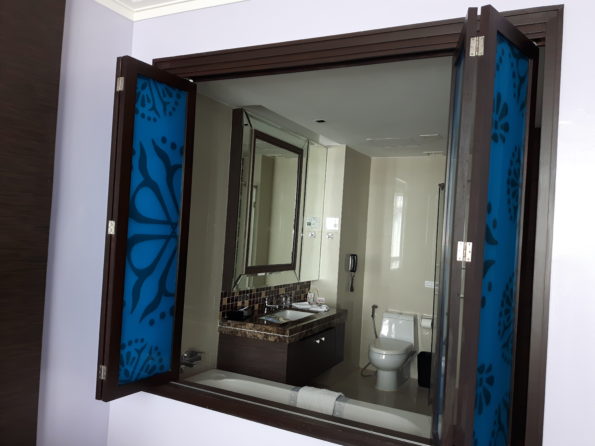 Even a view from the bathroom! 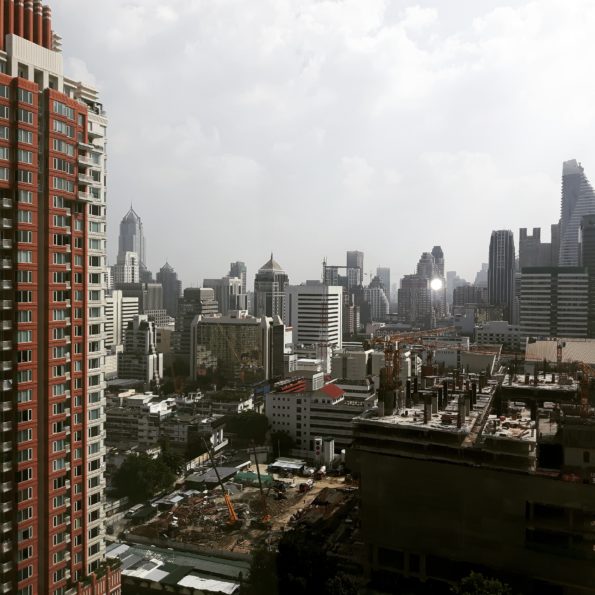 Room with a view of Pratunum….

After a quick nap, I decided to check out my local neighbourhood.  Whilst Thailand is famous for it’s temples, I think there may actually be more 7-11’s in Thailand than temples – there is one every street corner.  I could spend hours looking at all the funky snacks available – there’s certainly some odd flavour profiles going on here…I tried the Scallop Garlic Flavour – it’s definitely an acquired taste, and lingers quite a while.  Not in a good way. 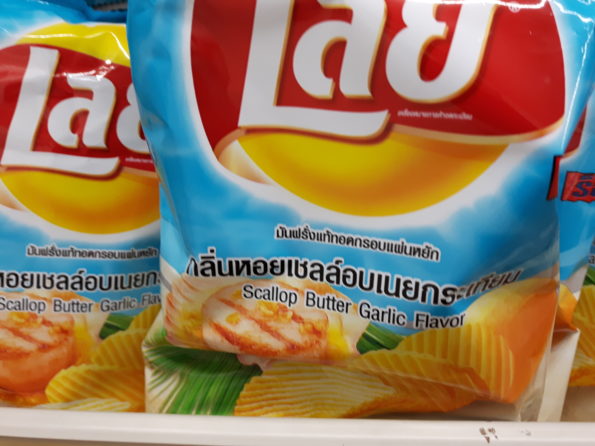 Scallop butter garlic lays….warning the taste lingers and lingers….not in a good way! 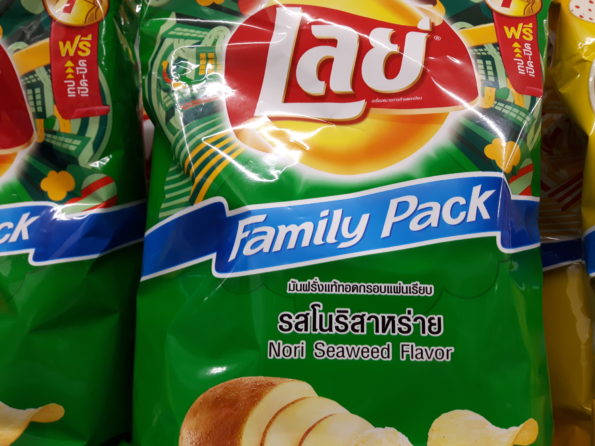 Alternatively you could always try out some shredded, seasoned cuttlefish!

This was just the beginning of my journey into the culinary madness of Bangkok….what I like to call “what the heck is that?” moments.

Which is a statement I repeated over and over again as I stumbled onto a local night market, 30 feet from my hotel.  The Talad Neon Night market is a funky market where you can find flea market type retro fashion and homeware,  crazy-ass food and local live bands playing.  I grabbed myself some dinner, however I decided to pass on the fried insects.  Not sure my belly could handle fried caterpillars…I’ve since been told they are crispy on the outside and chewy on the inside! 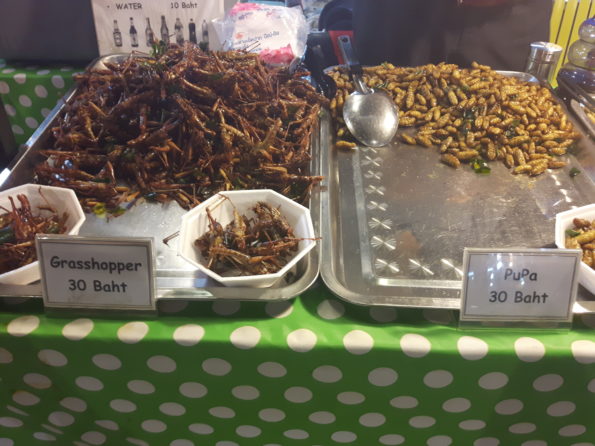 Fried grasshopper and pupa! This can be yours for less than $2! 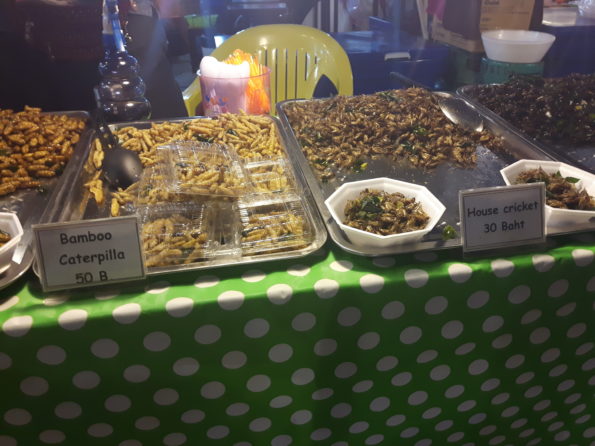 After a walk around the market, and successfully having my mind blown on my first night in Bangkok,  I took my tired body back to my hotel room and settled in for the evening,  hoping to wake refreshed for another day in Bangkok!

And The Elephants Go Marching One By One…

And The Elephants Go Marching One By One…

Welcome to the Dep – a place where...

Hi I’m Shannon Murphy and I am a foodie enthusiast whose life revolves around all things delicious! An avid cook, baker and traveller, no matter where I am or what I’m doing I think about food!